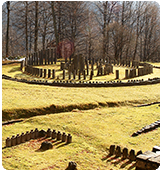 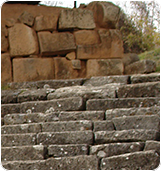 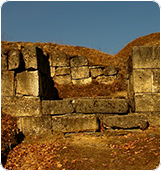 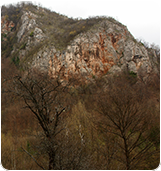 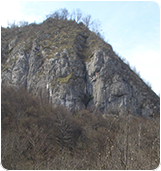 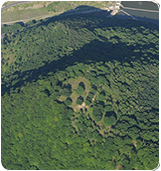 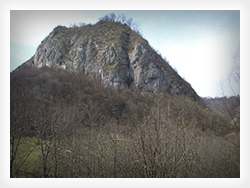 Most of the defensive structures were built on the northern slope of the cliff: a system of ramparts, platforms, embankments, as well as on the terraces or on the top of the hill.

The longest rampart is a 115 m long and 2 m thick wall, built in the so called murus dacicus technique, on the northern and north-eastern slope.

The access into the citadel was possible by climbing limestone slab staircase to the monumental gate (located in the north-eastern extremity of the rampart). Beyond the gate there are three artificial terraces, the first of which is also the largest.

The second one (22X17 m) is enclosed by a 1,4 m thick wall. Inside this precinct, a rectangular timber building on limestone foundations was investigated. Four post holes of a wooden watchtower were found in the middle of another stone enclosure. On the same terrace, two drainages were carved in the bedrock to evacuate rainwater over the platform’s edge.

The third terrace having the dominant position (904 m of altitude) is defended by a strong, trapezoidal stone wall enclosure. In a central position a wattle and daub tower-like structure was found.

On the north-western side of the hill a 18 m long platform (battle platform?) was built, supported by another wall built in the same technique. As the southern, eastern and western slopes are very steep, apparently there was no need of any artificial defensive structures.

Several limestone plinths were found in the 1960s on a terrace, belonging to a rectangular temple the plan of which remained unknown.

Because of the damages inflicted to some parts of the site by the XIXth century works, most of the archaeologists’ attention focused on the so called defensive, more visible, structures, so civilian buildings or facilities are still virtually unknown.

Nevertheless, some artefacts indicate the existence of some ancient workshops on the site: clay and sandstone moulds, probably used for bronze casting, as well as a crucible and a small anvil (fit rather for a gold-or silversmith). There also are some findings probably belonging to a forge that occurred at the foot of the hill.