Pottery painting is an art that spread around especially at the end of the Iron Age in temperate Europe. In the large settlements of the times of the Dacian Kingdom, the painted ceramics is represented mainly by tableware (“fruit bowls”, jugs, bowls, pots, two handle cups, etc.), as well as larger pieces. One of the most important production centres was in the dava of Brad, on the Siret river, followed in the order of the importance by Ocnița (Vâlcea county). The majority of the painted vessels were decorated with red stripes (in various shades) on a white-yellowish slip (called engobe), or applied directly on the ceramic clay. Other frequently used ornamentations were the geometrical ones, more or less complex. 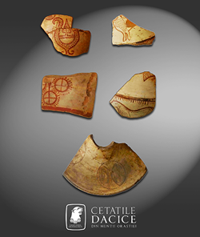 In Sarmizegetusa Regia, a local ceramic painting style has been developed during the Ist century AD, characteristic for this great and complex functioning settlement: the figurative style. This style used, beside the usual colour stripes, a series of motifs never before encountered in the other contemporary Dacian centres. The artisans used complex geometric figures (circles, grids, spirals, dots, etc.), floral ornaments (flowerets, leaves, vines, stalks, etc.) and animal figures. Until now no human representations were found. The artist scratched sometimes only a preliminary outline on the dry surface of the engobe, later painting over it. There are cases where the painter didn't follow the original design and preferred to improvise. All these ornamentations were assembled in rich compositions, doubled by lines and dots, organised most of the times in decorative stripes on the surface of the pot. These painted recipients were found mainly on the civil settlement terraces, in contexts that can be dated especially in the Ist century AD. Few pieces were found intact, so the reconstruction of the way the decoration was organized is very difficult. Ceramic fragments belonging to the same style were also found at Fețele Albe and at Fața Cetii, sites near Sarmizegetusa.

The most spectacular ornamentations are the animal figures representing real as well as fantastic animals. In the first category we mention felines, wolves, bulls and birds of prey. To the second category belong some four legged creatures with one horn or a sort of griffon. The method used for the stylizing of the animal figures does not always allow the identification of the species. We believe that they were illustrating a mythological universe that, unfortunately, remains unknown.

The Sarmizegetusa Regia painted ceramics is consistent with the specific rich ornamental atmosphere of art of the region, along with the large decorative iron tacks or the forged iron disks ("the shields") of Piatra Roșie and others.